1. Show Feet on Every Page. If, like me, you have a tendency to fall back on panel after panel of talking heads, this is a good way to force yourself to try other compositions and layouts. I think I learned this from Eddie Campbell.


2. Don't Have Your Lettering Touch the Sides of the Balloon. Since most people--unfortunately--use computers to do their lettering now this isn't as much of a problem, but it's a glaring sign of amateurism that is easily avoided.

3. Solid Blacks Are Your Friend. I'm a big fan of using a lot of solid blacks. Aside from making the pages more visually interesting, a white figure against a black background really "pops." 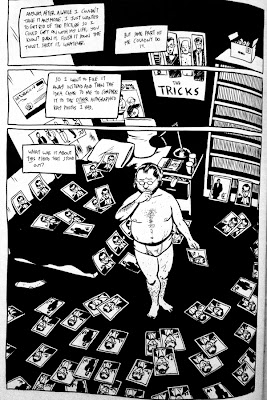 4. Make Sure Your Solid Blacks Are Solid. Another easily fixed sign of amateurism is when someone attempts an area of solid black, but does a sloppy job of filling it in.

5. Put Visual Reveals on Even Numbered Pages. If you put that splash page showing the young lovers finally embracing on page 5, the drama will be spoiled because as soon as the reader turns the page to read the spread of pages 4 and 5 their eye will immediately be drawn to the big image on the right hand side. They'll go back to read page 4 (hopefully!) but by then the cat will be out of the bag.

6. Keep Moving. Your work will have flaws. Make each page as good as you can, but don't let the quest for perfection ruin your momentum. Figure out what mistakes you made and try to make your next page better. I vividly recall being unhappy with a page I once drew and told myself that once I completed the book I would go back and redraw that page if I had the time. I did wind up having time, but couldn't remember which page it was I wanted to change. Keep moving.

7. Draw What Pleases You. You're going to spend way, way, way more time with your work than any reader or critic so make sure you're having fun.

8. Left to Right. When composing a panel, keep in mind that most westerners read left-to-right, so that will dictate not only how the reader interacts with the page, but also within the individual panels. Suppose Wolverine is punching Batman in the face. Ideally, I would put Wolverine on the left side of the panel, so the reader's eye would follow Wolverine's arm to the point where it connected with Batman's jaw--so the momentum of the reader's eye would mimic the motion of his arm. If, on the other hand, I wanted it to be a surprise that it was Wolverine doing the punching I would flop the layout so first the reader would see Batman's face with a fist hitting it and as the reader continued from left-to-right we would find out *who* was punching after we discovered that a punch was happening.

9. Use Good Materials. I filled in the blacks in my first graphic novel with Sharpies. Within a few years the blacks had turned a sickly greenish-brown, so now I'm sitting on 600 pages of useless art.

10. Don't Listen to Any Dumb Rules. Essentially, rule 7 is the only one that matters.


You can view Alex Robinson's work at: www.comicbookalex.com
Posted by Dov Torbin at 7:01 AM